Don’t know about you, but carving up a pumpkin is something I love to do with the kids each year! But even more than carving a pumpkin, I love to see what happens after a pumpkin begins to rot! I know this may seem strange, but science is all around us and sometimes you have to just go with it in order to foster curiosity! So, instead of throwing it out this year, turn it into a learning experience with your children!

This is a great blog that discusses how one mom and her son try to answer the question “What happens to a rotting pumpkin?”

What I love about the idea is how she went with her son’s question and worked with him to find the answer. Instead of just having her son observe the pumpkin, she created a simple, inexpensive journal in which he could not only draw a picture of what he saw, but she could write for him to document his ideas! If scientists do this in their world, shouldn’t kids? Yes, they should! Imagine if you used a camera to document the decay. You could create a photo story of the event or even print the pictures out and tape them into your child’s journal so they have real pictures that show the decay.

My teacher friends know I am always on the look out for activities that can be tweaked to make simple experiments for our young scientists. So how could you turn this activity into a simple experiment? It begins with thinking about what we could change about the pumpkin. Well, think about this-what about the physical properties of the pumpkin could we change that might make a difference on decomposition? What about size? Does a bigger pumpkin decompose the same way as a smaller one? Does it decay in the same rate? What about changing the type of fruit we use-so instead of using a pumpkin, because we know what a pumpkin does, how about an apple? Will an apple decompose the same way as a pumpkin? Simple experiments always involve changing one thing and then making observations or collecting data to see if that change made a difference or not.

So don’t throw out the pumpkins just yet! 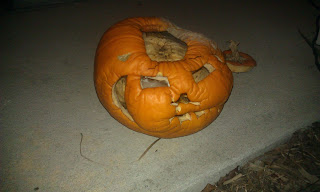